India has chosen sides in the US-China tech war Jai Vipra is a technology policy researcher focusing on the economics of digital platforms in the Global South.

When the Indian government banned 59 Chinese-owned apps last week, following a border clash which killed more than 20 Indian soldiers, commentators called the response comical for its lack of proportion.

India’s professed reasons — “safety, sovereignty, defense and integrity of India and to protect data and privacy of people of India” — do not reveal the entirety of what was really happening. If we understand the ban as primarily a geopolitical and economic measure against China, which is fighting the U.S. for digital supremacy, then it starts to make more sense.

India’s ban on these Chinese apps should, then, be seen in the light of the digital Cold War we are now in the middle of.

The U.S. has relentlessly attacked Chinese telecoms company Huawei, with President Donald Trump signing an executive order that restricts U.S. companies from doing business with it and other foreign companies posing a “national security risk.” It has pressured its allies to bar Huawei from participating in their fifth-generation, or 5G, networks and also opened a national security investigation against ByteDance, owner of the short video app TikTok.

The use of a “national security” cloak by some countries to implement trade-related restrictive measures under vaguely-worded World Trade Organization rules on security is what we see in India’s ban too. American and Chinese tactics are leaking outside their conflict and other countries are being forced to take sides.

It is true that there are many ways to bypass these bans, and that Indian users’ contribution to most of the apps’ overall revenue is insignificant as of now. But the ban still cuts off the apps’ legal access to one of the world’s largest markets and, legitimately or not, harms their economic interests. This move will likely lead to economic retaliation and escalation on both sides.

The digital Cold War is taking place because the U.S. and China are competing to become the global leader in the technologies of the future, like 5G, artificial intelligence and the internet of things. U.S. companies make up 68% of the market capitalisation of the world’s top 70 digital platforms, and China only 22%. Other countries lag far behind both and are reduced to choosing camps.

India is already considering banning Huawei and ZTE, another Chinese telecoms company, from participating in its 5G networks. On the other hand, Facebook’s investment in India’s Reliance Jio, also a telecoms company, has passed without objections from the IT Ministry or the competition regulator.

With its latest move, India appears to have given up its neutrality entirely and chosen the U.S. bloc in the digital Cold War. The conflict at the border only provided an impetus for a policy choice already in the offing. 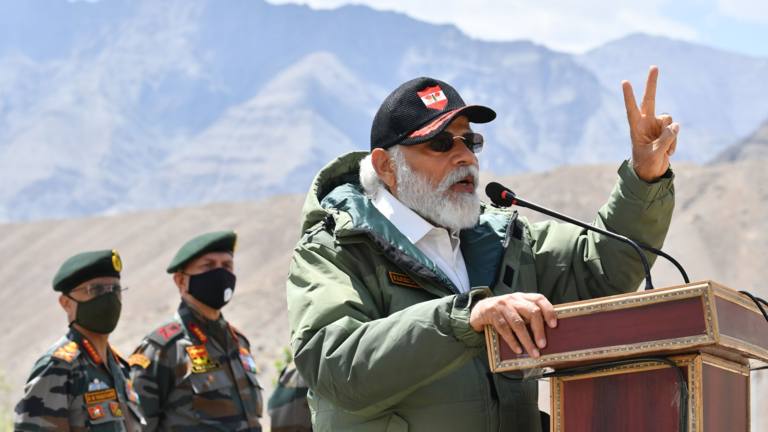 Narendra Modi adresses soldiers during his visit to Ladakh on July 3: the conflict at the border provided an impetus for a policy choice in the offing. (Handout photo from Press Information Bureau)

As economic measures taken for geopolitical reasons manifest in the digital sphere, we need to ask for accountability when governments ban foreign digital service providers. Governments should assess the economic impact of such bans on local businesses, users and workers before they are instituted.

Governments have every right to take economic measures against digital service providers for their own citizens’ welfare. They have the right to encourage the development of local technology undertakings, both public and private, that can compete with foreign businesses. But these measures should be presented with the true geopolitical and economic reasons behind them, and not merely as actions taken for national security or protection from espionage — that all but ensures they can never be questioned.

Before rushing to pick a side in this Cold War, India should remember that economic independence from China is impossible under current conditions. Global supply chains depend heavily on China, and even the coronavirus pandemic has not led to a major exodus of production away from China as was initially predicted.

Besides, a world with the U.S. as sole tech leader is best avoided by all independent-minded nations. India’s interests will be served most effectively if it maintains its economic and political neutrality in accordance with its history of non-alignment.

Did China Steal Canada’s Edge in 5G from Nortel?
arrow_forward